#274: From 0 to 13 Ace Hardware Stores and an ESOP: How Gina Schaefer has been Enjoying Work, Making an Impact and Creating Wealth by Being Intentional

Intentional Growth
#274: From 0 to 13 Ace Hardware Stores and an ESOP: How Gina Schaefer has been Enjoying Work, Making an Impact and Creating Wealth by Being Intentional

Gina Schaefer is a passionate entrepreneur, co-founder and CEO of 14 Co-op Ace Hardware stores located in Washington DC and the Baltimore area. Gina founded her business after noticing that there was a shortage of hardware stores in the lower income, urban neighborhoods of DC.

After 18 years of growing her business to 13 stores and employing over 250 people she decided to sell her ownership to her employees via an ESOP. Gina was a brand new entrepreneur when she opened her first store- formerly in SaaS - when she started in her early 30s. This is a great story of someone who saw opportunity in a low income place and created a mission to change the lives of people through “a few cool hardware stores.”

Gina is a retailer, entrepreneur, public speaker and employee advocate based out of Washington D.C. In just 18 years she has started, grew and partially sold her 14 Ace Hardware stores to an ESOP where her employees can create wealth and enjoy work. Gina is three months away from completing her book, “Recovery Hardware” When Gina has time to relax she writes greeting cards because she believes in the power of a hand written note.

10:11 - “At its foundation, a purchasing co-op is a collective purchasing tool for independent retailers. It gives Ace the opportunity to go to… Milwaukee, for example, or Black and Decker or DAP and negotiates on behalf of all the Ace retailers.” - Gina Schaefer

35:21 - “We had the ability to take that money, use it to open a new store, and pay ourselves back in future stock money.” - Gina Schaefer

39:11 - “People are afraid to talk about [how much their businesses are worth].” - Gina Schaefer

43:48 - “No one opens an independent business with enough phone lines to handle a pandemic.” - Gina Schaefer

47:04 - “That made us even more aligned with the idea of an ESOP because we felt like, if anything was going to help make a difference in incoming equality, social inequality, all of this crap that–as a country–we can’t seem to figure out, the ESOP was an answer” - Gina Schaefer

#237: The Road Less Traveled: How Sandra Conquered Silicon Valley on Her Own Terms

Not every entrepreneur’s journey ends with them running a unicorn. Scratch that. Most don’t. On today’s show, Sandra Shpilberg and I talk about alternative funding to venture capital, switching from a service-based business model to a SaaS, as well as a host of great examples of how to make your niche work for you to achieve the entrepreneurial dream—all while making a compelling argument for entrepreneurs to foster a beginner’s mindset at all stages of your career. Tune in for a lesson in unconventional funding and the impact being intentional about how you raise funds has on the long-term.   What You Will Learn In Today's Podcast Interview The three questions VC firms ask let Sandra know they weren’t going to be a good fit for her. How differentiating her business in the market and going after niches her competitors deemed too dangerous brought her success. What pushed her from a service to a software business and her unique take on the SaaS market. Why Sandra chased recurring revenue rather than VC funding and the success she found doing a deep dive into her niche. What the beginner’s mindset is, from Sandra’s book New Startup Mindset, and why it’s better than the mindset that you’re an expert since this often means you’re set in your ways. The impact of over-confidence is underestimated and why you should stay humble. How an executive coach helped Sandra think through the impact of two out-of-the-blue offers and what she wanted her exit to look like. Customers can become more like partners as you grow, and the value of doing this for both parties. Why Sandra has no seller’s remorse, despite selling early, especially in light of the pandemic. The VC formula and the rarity of ... 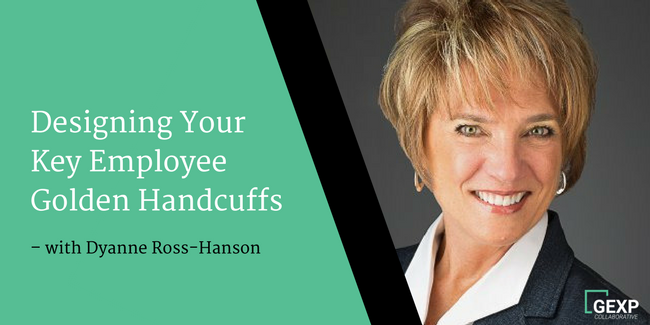 Dyanne Ross-Hanson started Exit Planning Strategies in 2005 when she realized the business owners that she worked with didn’t give much thought to how they were actually going to get out of their businesses. She saw a need to educate these owners and develop intentional plans for ownership transition. If you listen, you will learn: Why rewarding and retaining key employees is so important Four design variables of an incentive program for key personnel Difference between cash based and stock based incentive plans Different ways you can structure cash based incentive plans Ways to transition ownership financially to family members Tax implications for different incentive plans Key Employee Retention “The reality is that as an owner prepares for that inevitable transition, they recognize the importance of building as much value in the company as they can,” says Dyanne. There are many value drivers to look at when exit planning. Nothing is more important than recruiting, establishing, and retaining your “key bench.” This should be top priority well before talking about the sale or transition of your business. If you don’t have an employee retention or incentive program in place, you need to look into it ASAP! Key employees will help grow the company before the sale and make the actual deal more valuable because of their extensive knowledge and skill sets in the business. A solid employee retention program should be in place when these people are recruited and hired. You can assume that key performers will ask for it as a part of their compensation plans. Employee Incentive Plans If an employee retention or incentive plan is structured correctly, the plan will pay for itself. It should be a win-win for the business owner as well as ...

Todd shares the mindset-changing framework he created in his book The Alter Ego Effect to help you break through obstacles and eliminate your self-limiting beliefs for amazing success. This is the mental playbook used by Olympic and professional athletes, world-class entertainers, and top-tier entrepreneurs to achieve their most ambitious goals. If you're ready to up your game, this is the episode for you.    What You Will Learn In Today's Podcast Interview: Why “just deal with it” is terrible advice to a business owner who is evolving their role and what to do to address the underlying issues. How to access your inner hero. The people who win in life have the most valuable skills; do you or your alter ego manifest those skills? When you change the way you relate to yourself, all things change. Why imposter syndrome is a buzzword in the self-help world these days. That discounting your achievements ("oh, that was just luck") contributes to real imposter syndrome and feelings of anxiety over being “found out” (despite said achievements) and what to do about it. How to avoid self-help traps that take away your power rather than provide real ways to succeed in overcoming mental blocks and imposter syndrome. Why “fake it ‘til you make it” is good advice and how to figure out when you’ve made it. Anyone not getting the results they want is acting in a fake way. What traits entrepreneurs and athletes share that draw them to their fields. How to break your brain to achieve success by overcoming some built-in drivers (such as to seek comfort) that hinder us when we aren't intentionally choosing them. Why you should carefully choose heroes to emulate in all aspects of your life from work to home ...