Use Your Company Cash Flow as an Annuity 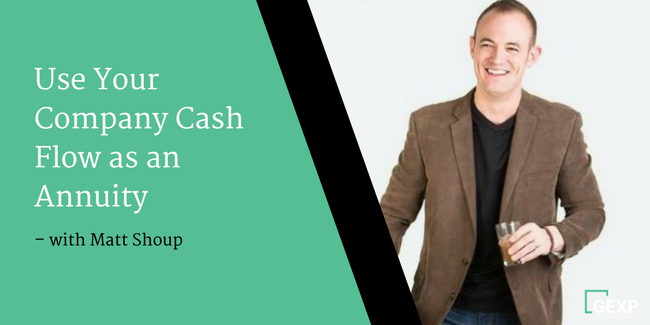 Intentional Growth
Use Your Company Cash Flow as an Annuity

We’ve gone for a different take on this week’s episode by speaking to someone who’s never sold a business. What we like about Matt Shoup is his perspective. The way he has managed to get his business to a point where he can disengage from it whenever he wants is a great lesson for all of us.

As well as the obvious of achieving a good work/life balance, presiding over a business that doesn’t need you is the ultimate goal in maximizing the sale value.  In Matt’s case it has also enabled him to be a proper family man, indulge his passion for jiu jitsu, and travel to Spain as and when he pleases.

What got him into the trade?

He started working as a painter as a college summer job, but back then had no idea that it would lead to him founding the multi-million dollar painting firm he owns today. It sure was a bumpy road that got him there. Having graduated from college he worked in a bank and in his words ‘lived the American Dream’, i.e. big house, big car and started a family.

Unfortunately he over-extended himself to make it happen, so when he was suddenly made redundant, he had $20,000 of debt to worry about. Before he’d even called his wife to tell her he got in touch with a couple of old painter contacts and then proceeded to throw himself into the painting business full time. He did $500,000 revenue in year one, and now, 15 years later, his company is consistently doing $2 – $2.5 million every year.

What made him change his priorities?

He thought to himself one day, “what is life going to look like if I keep up at this pace?”. He felt that he’d miss family time if his company was going to continue to grow. He also realised that the growth was actually hitting his profits, having fallen into the classic trap of chasing revenue rather than profit. He noticed that as they were expanding to other markets/areas, they were losing market share in their original core market, so he reined in the growth and returned to the company’s natural niche.

How did he delegate?

Once he felt the business was solid after the re-alignment of the growth plan, he made a list of everything he did on a daily basis and then gradually crossed out more and more of his tasks. He realised he was being a control freak and ‘gave people the responsibility they should have had from the get go’. Then he kept going on vacations. Small at first, but even just a few days away helped focus the workforce in his absence. Before he knew it he was able to go on eight-week vacations without it adversely affecting the company.

How did he cope with letting go?

He remembers a moment where his senior management basically threw him out of a meeting and said they’d be able to get more done without him there. He had mixed feelings of pride that he’d achieved the goal of having his company run without him, but he also struggled with the notion that he wasn’t needed any more.

Jiu jitzu suddenly became his salvation. He started to draw analogies with jiu jitzu and the judgment he needed to run a successful business, and that, along with regular travel to Spain, helped fill the void.

“I feel that I end up being more effective, efficient and profitable when I put business last in terms of priority, rather than focusing on it all the time.”

“It does not matter about what you think about your company; it’s what your customers and community say about you that will build your brand.”

“Own your worst and show people what you do to make it right.”