The ROI of Company Culture in a Business Sale 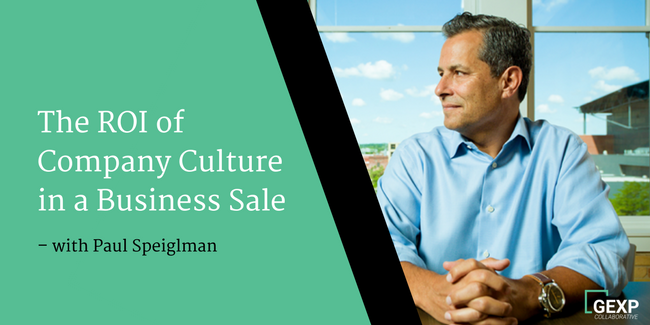 Intentional Growth
The ROI of Company Culture in a Business Sale

Paul Spiegelman founded BerylHealth and eventually sold to Stericycle, a global services organization with 25,000+ employees. He was able to take his most favorite part of his job and transition into the role of Chief Culture Officer at Stericycle in hopes of scaling the culture he built and cherished at his first company.

If you listen, you will learn:

Paul’s first business was a medical alerts company he started with his two brothers. Within a year of starting the company, a hospital contacted the brothers in need of someone to handle physician referrals and their core business changed. They ultimately became an outsourced provider of call-center services for hospitals across the country taking calls and tracking patients into hospital systems.

A call-center operation can easily become a commodity business but Paul wanted to create value for their customers. They ended up building a great brand around their unique internal culture that drove customer loyalty and profitability. This created extreme value when they eventually decided to exit the company in 2012.

Organizations Are a Reflection of the Leader

Paul explains a few different definitions of culture. “Culture is the extent to which team members or employees will do work beyond what is expected of them as well as the vibe that you feel when you walk through the doors of that business.”

“Culture and leadership are really the same thing and as leaders we have to make choices on how we lead. Culture and treating people well is not only the right thing to do, it is good for business. There is an ROI to it. It is as important of a process in our business than any other process we have. Not every company works this way,” explains Paul.

Paul helped create a brand around their culture that not only drove employee loyalty, but that drove customer loyalty. The culture allowed them to sustain and grow. A call-center is a tough place to work but they made it fun for their employees who they cared about, rewarded, and let them be themselves.

Paul and his brother that was still involved in the business didn’t have any intention of selling but knew it would come at some point. “All I wanted to do was build a great business and sustain it for as long as possible.”

An offer for the business did come up in 2010 and during due diligence, they walked away from the deal to protect their team members. It just wasn’t the right fit. A year later they were approached by Stericycle to become a part of their family, and it was a better fit for their company and culture.

Paul was curious to determine if his current company culture could scale to a bigger company like Stericycle which had been around for 25 years with 25,000 employees in 18 countries. He became Chief Culture Officer of Stericycle after the sale in 2012 with this goal in mind. After some work and overcoming challenges with management, Paul was successfully able to bring his company’s culture and vibe over to Stericycle.

The transition to life after business for Paul was pretty smooth as he felt good about the company taking over his business and he could continue to do the part of the work he loved most. During this podcast episode, Paul further talks about some of the challenges he faced during transition, gaining trust of management and employees, and programs and processes that can be put in place to measure culture and employee happiness.

Paul Spiegelman is Chief Culture Officer of Stericycle, a NASDAQ listed global services organization with 25,000+ employees and is the Founder of BerylHealth, The Beryl Institute and the Small Giants Community.

Paul is a New York Times best-selling author and has been honored with the Ernst & Young Entrepreneur of the Year award.

Paul is a sought-after speaker and author on leadership, employee engagement, entrepreneurship, corporate culture, and customer relationships. He makes frequent radio and TV appearances and his views have been featured in the Wall Street Journal and Inc. Magazine, and is currently a columnist for Forbes.com.

Paul practiced law for two years prior to founding BerylHealth. He holds a bachelor’s degree in history from UCLA and a law degree from Southwestern University.