Scale Your Company and Sell It 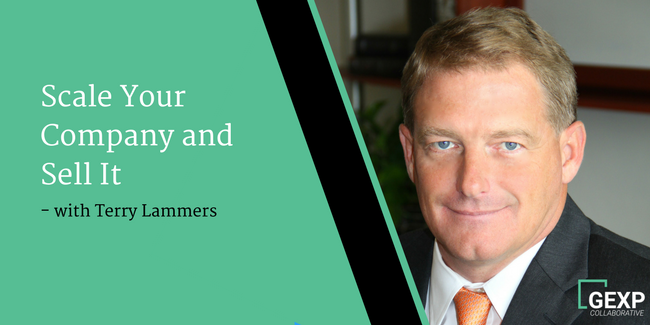 Intentional Growth
Scale Your Company and Sell It

We have a serious high achiever on the podcast this week – a man who managed to buy 11 companies (one in just three days) and sell his own $42 million company in just six weeks.

After moving back home, Terry Lammers bought the family wholesale fuel and lubricants business. He became prolific in the marketplace by then buying up more and more of the competition. You will not find a man more experienced in the game of M & A…

If you listen, you will learn…

Where did Terry find the 11 competitors he bought along the way?

Terry knew that in the limited area he did business, there was only a finite amount of competition and business to be had. He was always on the lookout for people that were trying to find a way out. Terry knew that once the competition was actually ready to sell, he had to jump on the opportunity.

Some of the acquisitions were a bit more cumbersome and hairy (like the deal Terry explains went bad after the kind-hearted man went back on his word). However, most of the businesses that Terry bought had returns that the best of us could only dream of!

How were most of the deals structured?

Terry had a knack for knowing exactly what a business was worth to the seller and how to make it a great deal for both sides. He didn’t just let the professionals dictate the terms and conditions for the deal…he made a huge effort to make it a no-brainer for everyone.

Some of the deals were bonus structures (earnouts), some were cash offers, some were stock purchases, and others were a combination. The only thing on Terry’s mind was to find a way to make a deal fair for everyone involved and get it done!

What did Terry do differently because of his experience buying companies?

After buying 11 other companies over the course of owning Tri-County Petroleum, Terry realized that things really needed to be buttoned up if a good deal was to be made. Following are some of the top things he did with intention before the sale of his company:

What about the employees?

Terry called everyone into a normal monthly meeting when he decided it was time to tell all of his employees about the sale of the company. There was no guarantee that a job was lined up for each employee under the new ownership…but the good news was that everyone was offered a job but one employee!

The reason the one employee was not hired was they had an entitled attitude during the interview process with their new boss (weird how that didn’t go well!). All the employees were treated very fairly because the buyer decided who they wanted to keep on the payroll. The fact that they hired all but one person showed that Terry had an amazing group of people working for him.

What did Terry do after he sold?

After selling the company, Terry sat at home for a few months watching The Morning Show, Doctor Oz, Opera, and every other daytime television show until his wife told him to go do something! Because of his love for the deal and the financial engineering of the process, Terry decided to go and work for a large commercial bank.

With three years of working the business marketplace and providing loans, the large 20,000 employee bank started to put more rules into place. One rule in particular was a tighter quota that would lead Terry (an entrepreneur who sold a $42 million business) into possibly getting written up in his retirement gig…

That was all it took for Terry to break off and start his own venture again. This time it was filled with passion and purpose as he helps business owners accomplish what they want through the sale of their companies. He specializes in Mergers & Acquisitions and making sure the deal gets done where everyone feels like a winner.

Innovative Business Advisors
Broker – Kunkel Commercial Group, Inc.
Innovative Email Link  Join Our Newsletter
618-530-8922 Cell
Terry is a graduate of Webster University in St. Louis with a bachelor degree in business management. He was the President and Owner of Tri-County Petroleum, Inc. TCPI was a wholesale fuel and lubricants supplier servicing Southern, IL and the St. Louis Metro area. From 1992 until the company was sold in 2010, Terry grew the business from $750,000 in sales to over $42,000,000 including the acquisition of 11 different companies. This business was sold in 2010 to Growmark, Inc. and 8 of its FS Member Companies. After the successful sale of his company, Terry spent three and a half years with Regions Bank as a Vice President of Commercial Banking because his wife told him he had to have a job. In July of 2014, Terry teamed up with Dave Kunkel and launched Innovative Business Advisors. Innovative is a comprehensive business brokerage firm that helps people buy and sell companies, performs business valuations, and provides exit planning. You can visit their website at www.Innovativeba.com.

In December of 2015, Terry received his official designation as a Certified Valuation Analyst (CVA) from the National Association of Certified Valuation Analysts (NACVA).  In 2015, Innovative Business Advisors purchased Cecil Management Group, a residential and commercial property management company. CMG manages approximately 900 residential properties and several commercial buildings. CMG also manages 65 homeowner associations, encompassing over 4,500 homes and has a maintenance crew of 5 technicians. CMG is located in O’Fallon, IL and most of the properties they manage are in the Metro East area. Their website is www.cecilmanagement.com.

Terry is a lifelong resident of the Highland, IL area where he currently lives with his wife Julie of 22 years and their three children. Sydney (20), Caitlin (18), and Trent (16). Sydney is a junior at the University of Kentucky where she is studying to be a doctor. Caitlin is a freshman at the University of Columbia and is studying to be a CPA and would like to specialize in forensic accounting. Trent is a sophomore at Highland High School and enjoys football and basketball.  He is leaning towards pursuing a degree in finance.