From Bankrupt to $270 Million Dollars 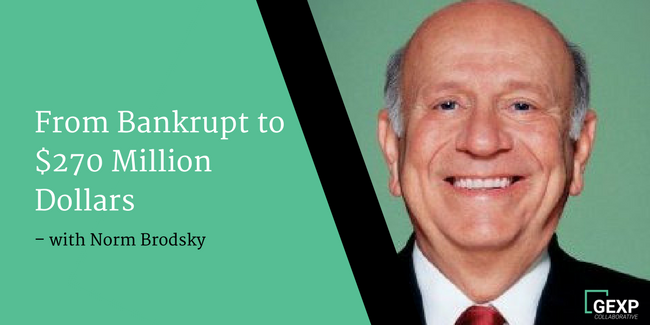 From zero to $120+ Million in 6 years to bankruptcy, then to the cover of Inc. Magazine and the eventual sale for hundreds of millions of dollars, Norm Brodksy deserves every ounce of praise and money he received when he sold! The battle wounds of his first tragic business venture turned him into one of the wisest entrepreneurs I have ever encountered.

The stories Norm shares with us are incredible! It was fascinating hearing him recount how he used his articles in Inc. Magazine to showcase his selling process with his potential buyers and then rejecting the offer at the last minute despite having appeared on the front page with the headline “Norm Says Yes”.

Norm also shared with us some great real-life examples of how he made his companies so successful. Always to the point, it’s impossible not to be inspired by what Norm has to say.

What are the lessons we can learn from Norm’s first business?

Norm was crystal clear that even though there was a change in the marketplace and a variety of external factors, it was up to him to take responsibility and not to slip into the “Groundhog Day Syndrome” as he called it. His first piece of advice was:

What was the main thing he did differently with his second business?

The first (and most important) thing Norm did was take a look at who he is, what he wanted from his business, and why. At this point in his life as an entrepreneur, he decided the culture, vendors, and clients he worked with were the most valuable parts of a healthy and sustainable business.

Bo Burlingham, the Editor at Large from Inc. Magazine, partnered with Norm on the column when he was selling CitiStorage. He also featured him in his book “Small Giants: Companies That Decide to Be Great Instead of Big“ because there were multiple times Norm had to decide whether he wanted to chase the revenue number again or maintain a profitable and healthy business.

How does Norm define “company culture”?

In short, it’s the way the employees are treated within the company. He viewed his employees more like being part of his family than just merely his workers. The best part is, by putting in effort and energy into his culture he was able to enjoy what he did and see the ROI the culture brought in his exit.

With help from his wife, he built a lasting culture at CitiStorage that happened to be a vital part of the value of the business. He discovered the most important assets he had were his personnel. In his words, “Once I discovered that, business became easier.”

How did Norm manage to be so hands-on with his staff but not devalue the business by being in the hub rather than the spoke?

He would go all out and be hands-on at the beginning of a relationship with a customer but then withdraw and hand over everything to his sales and customer service teams. His strategy was to give customers his cellphone number at the first meeting but stress that they should only use it if there was a very serious problem. At all times he was clear that they were dealing with a company, not just one person.

How else did he build bridges with his customers?

He would do what he could to make sure there was face-to-face interaction. Norm would take his sales and customer service people to visit the customer, or if a customer would come to his company, he would make sure they met.

What was the triggering event for Norm to sell CitiStorage?

Norm was at an industry meeting and said jokingly to the head of his largest competitor, Iron Mountain, “Do you want to buy it for $33 Million?” The reply came back, “Do you think it’s worth that much?” Norm laughed and said it wasn’t. Then the CEO of Iron Mountain replied with, “If you send me your quarterly financial statements and I help you until you get there, will you give me a crack at it?”

The cordial competitor went to CitiStorage after the conference and did a thorough valuation of the business and came out with some recommendations. It was not worth $33 Million, however as promised, if Norm sent quarterly statements they would take a look and give some help until he inched closer to that valuation.

One day they gave him a call saying they wanted to buy, but Norm replied that he wasn’t ready to sell!

There were just so many great things Norm said during our discussion. Here are some of the best:

Norm Brodsky, who co-authors Inc. Magazine’s “Street Smarts” column, is the founder of six businesses, including a three-time Inc. 500 company. He began writing “Street Smarts” after being featured on Inc.’s cover in July 1995. The column was nominated for a National Magazine award in 2006. He recently concluded a nine-part series, “The Offer,” about his ultimately unsuccessful attempt to sell his companies.

A graduate of Rider College and Brooklyn Law School, Brodsky began his professional career as a lawyer, but the slow pace of the courtroom made him want to do something different. His first entrepreneurial endeavor was Perfect Courier, a messenger service and trucking company in Brooklyn, New York. When the rise of fax machines in the early 80s decreased the need for messengers, Brodsky began looking for other opportunities.A phone call from a customer asking about box storage prompted him to call storage facilities in the area. Recognizing that others were charging too much and the potential market was great, Brodsky began CitiStorage with the profits from his trucking company. The archival storage and retrieval company now holds more than three million boxes. Brodsky and his wife, Elaine, run both CitiStorage and PerfectCourier from their Brooklyn office.