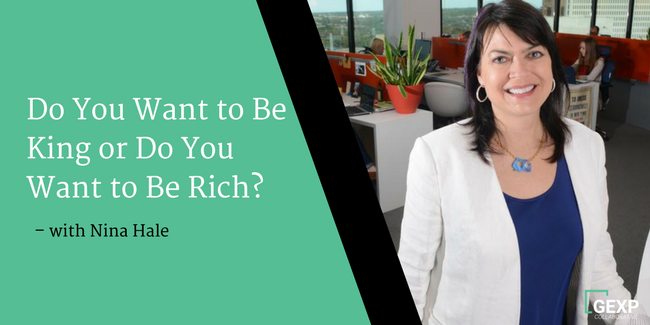 We’ve had some excellent discussions about the many benefits that an ESOP can bring, so we thought it was time to go in-depth with someone about their own ESOP exit journey.

Having built up her own highly successful SEO business, Nina Hale has now begun her second half and is in a life after business where she has some great balance and passion in her new ventures. Her story is a great example of how an ESOP can benefit a company every bit as much as it can benefit the seller.

What was Nina’s motivation to go down the ESOP route?

Nina felt she could dictate the terms of her exit far better with an ESOP than with a sale to an investment banker or rival. Right from the beginning of the business she was very keen to provide an environment for people to have a sustainable career, so an ESOP was the best way of preserving this culture after exit. It also gave Nina a vehicle to be philanthropic towards the workforce that helped make her company so successful.

What made her get out?

She hired a great managing director, Donna Robinson, who was keen to take on more responsibility. Nina then asked her if she one day wanted to run the company, which she did. She said “she was in for the long haul!” This was the beginning of the succession plan.

How did she measure the value of the business?

She hired a valuation firm who went through all the usual procedures. Then once Nina hit “her number”, she decided that anything above that should be used to reward the loyalty of her employees. Nina was comfortable with the fact that an ESOP can only ever offer a financial valuation, i.e. a valuation based strictly on her own company numbers. The strategic valuation, where a market competitor may pay a higher sum based on factors such as synergies, future growth and market share, is not part of an ESOP valuation.

What was the legal process?

Very cordial and stress-free for the most part, because Nina was able to hire the team for both the buying and selling side of the transaction. It felt like a project rather than a a negotiation.

A promissory note, where Nina wrote a loan to the company which the company is paying back to her at a specific interest rate. Because one of the loans was unsecured, a warrant was set up so she would be able to buy a certain amount of stock at a good price. The company has to buy that stock from her a year after the loans are paid off. This keeps her motivated to make sure the company is doing well.

Retention stock is part of stock appreciation rights. It encourages long-term loyalty, i.e. a 7-year agreement that doesn’t pay anything for the first two, but then 20% each year thereafter. She wishes she’d have done more of this with the employees.

“Really understand what your goal is and be true to yourself. Don’t hang on when you need to bring in somebody more professional than you. Sell too soon.”