Do Nothing & Take Control of Your Business and Life 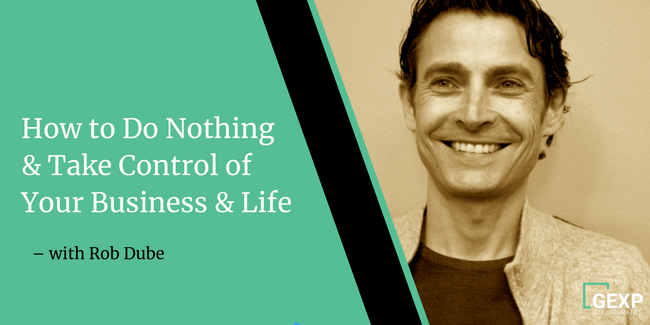 Intentional Growth
Do Nothing & Take Control of Your Business and Life

My guest today is Rob Dube. Rob has been a successful businessman since high school. He and his business partner have been running their businesses together ever since. Now Rob is the president and co-founder of imageOne. imageOne is a print managed business that began as a toner cartridge refurbishing company. It has since become one of the top companies in the Top 25 Small Businesses in America on the 2017 list of Forbes Small Giants. Rob has developed a strong relationship with his employees and himself through the practice of meditation. Unlike most of my guests, Rob sold his business in 2004 and bought it back in 2006.

During today’s episode, we discuss why Rob bought back imageOne and how he runs it better now. We also discuss Rob’s new book, Donothing, and his journey to discovering the benefits of meditation. Rob has developed a constructive relationship with numerous business leaders, including author Bo Burlingham. Bo is a wise business writer who has helped many business owners build better companies. Rob shares how Bo’s work has helped him restructure his business and personal life.  Rob has figured out how to fortify his business and business culture, if anything can be taken away from this episode, it’s business is a constant learning experience.

You will learn about:

How often do you do… nothing? With so much on your plate, it can be hard to find a quiet moment just to breathe. Today’s speaker, however, recommends doing just that. His success, and many others who have been on this show, derives from those moments he is able to clear his mind of the endless barrage of questions  and concerns that run through his head from the moment he awakens to the time he falls asleep.

Why is this, exactly? Focus. Being able to clear your mind and be present in the moment helps you gain focus and perspective to better tackle the things that matter in life.

The Value of Nothing

Rob Dubé is no stranger to building and exiting a company. In fact, he has built and exited the same company he currently owns today. Rob re-purchased the successful print managed business he sold after only 18 months of being an employee, rather than entrepreneur. His painful process of reaching that decision was helped along by meditation—by doing nothing.

It hit him one afternoon, when his family was out enjoying the nice weather and he was sitting inside, bordering on tears, from his anxiety over the stress of the office. Sound familiar? Even if you’re telling yourself you’re not that stressed out, that your business is fantastic and smooth-operating and you wouldn’t change a thing… chances are, you could benefit from taking a breather.

And that’s exactly what Rob did. By sheer instinct, he sat down and meditated. He focused on his breathing for several moments before returning to his day. While this didn’t solve his problems, it allowed him to clear his thoughts and process things more efficiently.

Doing nothing—whether it’s by traditional meditation, prayer or simply taking a moment and breathing—can give you the edge you need to break through a complex problem.

Every Problem Has a Solution

Rob had a surprise offer for his company, ImageOne, after he and his partner successfully got a contract with a hospital, beating out a larger competitor. This competitor then contacted the pair and they eventually settled on a deal—one which included three-year work contracts for both Rob and his partner, Joel.

During the first 18 months of their three-year contract, the pair discovered just how challenging their new roles were going to be. Trying to re-train a group of 500 copier sales reps was a very difficult task, one which Rob found didn’t fit his skill set or the vision he had when he started the company.

So, he and Joel decided to pay the new CEO a visit. During that visit, they discussed the issues as they saw them and expressed concerns with compatibility. The result of that meeting was Joel and Rob being offered the business again. The two decided to re-purchase the business to keep true to their principles and focus on being a successful small giant—a book which inspired Rob’s actions, and continues to do so to this day.

Bo Burlingham was a huge influence on Rob’s decision at the time. As part of Rob’s journey to lower his anxiety, he began attending conferences and even retreats focusing on meditation and silence, as well as some on building better businesses. In fact, it was at a Zingerman’s conference that Rob met  Bo Burlingham. The two kept in touch, and now Rob works closely with Bo on his various presentations around the country each year and has even been featured in Bo’s books.

While Rob’s focus is on being a small giant, and is doing so quite successfully, he still has a way to go before finding out if you can stay true to the values of Small Giant and still manage to finish big. In the meantime, he focuses on being transparent, governing his business with an employee-first mindset and generating a company culture that has impact in a community and would be missed if it closed.

Finding fulfillment in business by sticking to your principles is something many entrepreneurs strive for. Achieving this while maintaining good profit margins is the gold standard, however. What Rob has found, through being more mindful, is that it is doable if you approach it correctly. He has learned much from his time with Bo and his other pursuits for continuing education—both personally and professionally.

To that end, let’s consider Rob’s intellectual journey. Not only did he focus on taking courses, attending conferences or reading the right books related to business, he also focused on what helps him be a better and more effective person. Rob attended Zingtrains to increase his customer service and corporate culture, he read a multitude of books designed to provide insight and he networked and contributed to his business community to improve his business acumen. His business profits from his dedication and actions, and his continued improvement keeps his small giant on track to finishing big.

On a more personal note, Rob’s emotional and mental journey should be trumpeted as well. You can take all the business courses you want, but they won’t make you a better leader or help you manage your work-related stress if you are not self-aware. Rob enjoys meditating (as does his mentor, Bo) and recommends everyone should do it daily—you just need to find the right amount and time for yourself. It can be as little as two minutes each day, or you can emulate Rob and do 45 minutes when you first wake up and 20 minutes right before bed. Either way, this meditative practice will help you focus your thoughts and clear your mind so you can tackle your problems and find more effective solutions.

Find the path that helps you help yourself and your business the very best and plan it out. As one of Rob’s mentors used to say, “Vision without execution is just hallucinating.” You need to see it, plan it and execute it.

imageOne
Donothing: The Most Rewarding Leadership Challenge You Will Ever Take by Rob Dube
Forbes Small Giants 2017: America’s Best Small Companies
Rob’s email
Rob on LinkedIn
Rob on Twitter
Rob on Facebook
Rob on Instagram
Small Giants by Bo Burlingham
Silent Leader Retreat
Finish Big: How Great Entrepreneurs Exit Their Companies on Top by Bo Burlingham
The Great Game of Business, Expanded and Updated: The Only Sensible Way to Run a Company by Jack Stack
Focus: The Future of Your Company Depends on It by Al Ries

From Blow Pops to Forbes Best Small Companies! Rob started his first business in high school selling Blow Pops out of his locker. For the last 27 years, he’s served as President and Co-founder of imageOne, ranked as one of the Top 25 Small Businesses in America on the 2017 list of Forbes Small Giants.

Throughout Rob’s entrepreneurial journey, he’s developed an unwavering passion for delivering extraordinary experiences that positively impact the lives of his team members, the goals of their customers, and the fabric of the community…

A unique approach to business that has driven the company to success in its industry, and as a top workplace. imageOne is the leading organization in Managed Print Services and Document Software Solutions, and is well-known as an exceptional company, receiving local and national recognition for its multi-award-winning culture.

Rob is an avid meditator of 13 years, the author of donothing™ : the most rewarding leadership challenge you will ever take (set for release in early 2018), and organizer of the donothing™ leadership silent retreat.