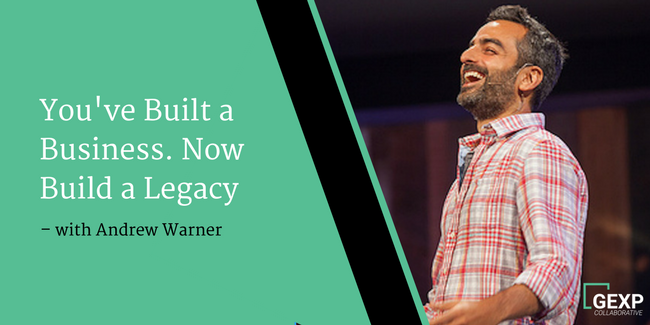 What an amazing conversation I was able to have with Andrew Warner; a man who certainly knows his way around business podcasts, having done over 1,300 interviews himself via his own platform on Mixergy. Andrew was MORE than generous because, even with a 2 week old at home, he spent an hour with me talking about his journey as an entrepreneur and what roads he has traveled to get to where he is today.

Andrew gave us some great insight into how he quickly built up a multi-million company with his brother and proceeded to exit the business and the grind it came with, before eventually reigniting his entrepreneurial spirit to get where he is today. There is a lot we can all learn from the vivid and amusing account of where his mind was at during the different phases of his life after business.

In this episode, you’ll learn:

How did Andrew Warner start out in business?

Andrew always knew he wanted to sell… whatever he did he wanted to hustle and be passionate about what he was involved in. He found home in a partnership with his brother, trying a few web-based businesses before eventually hitting the jackpot with an online greetings-card business. Once Andrew gained an understanding of affiliate marketing and advertising space for email newsletters, the growth of the company was exponential.

Andrew had some straight forward goals… to put 1 million dollars in the bank. The way to do that was, in his words, ‘to put in pennies and shit out dollars’.

What did he do to make the company grow?

By embedding a code that enabled him to capture the data from his greetings-card customers, he was able to harvest a captive audience for his regular newsletters. In the newsletters he would sell advertising space. Then he added another great money-making tool to his greetings-card signup process, selling the right for other companies to be able to offer their services to the same user. At one point he said he was paying 10 cents for each occasion a user populated a form, but was receiving $1.50 every time somebody signed up.

What was his goal?

He wanted to get rich and have $1 million in the bank, and leave a company that would outlast him. It took him 2-3 years to reach his goal of one million dollars in the bank but then he struggled to figure out what was next. Because Andrew is one determined dude, he couldn’t help himself but to keep competitions and benchmarks with himself even while he was on his “sabbatical“. He eventually defined it as: “let’s see how far I can run”.

How long did the business last?

After only 5 years, and tens of millions in revenue, Andrew and his brother hung up the towel of their company Bradford & Reed. But in his mind he’d wanted the company to last for hundreds of years. On his website he declares his exit strategy as ‘death’ (he’s inspired by the likes Apple and McDonalds, i.e. companies who outlived their owners), so although his business reached the initial financial goal, he didn’t hit his ultimate goal of leaving a legacy.

Why did he stop so soon?

Andrew hit a wall that many of us entrepreneurs can relate to… he worked himself too hard to think creatively and felt himself become less determined and less ambitious. He just kept wanting more, wanting to ‘run further’. But just like Forest Gump, if you don’t know where or why you’re running then it’s hard to know when to stop!

How did he cope with the transition?

Andrew’s friend got him into an exclusive gym in Manhattan. Because of his self-consciousness he would never have gone to a gym otherwise, but this was enough for him to fully embrace the fitness culture. He also got in to roller blading and would set himself challenges like completing a circle of Central Park. He would think to himself: “if I can complete this then I could overcome my business problems”. It was these little victories that kept his mind straight after he left his business.

For a time he didn’t think about being an entrepreneur. He moved to LA, saw a guy on Venice Beach selling trinkets, half asleep, and saw the peace in his eyes which made him think that kind of lifestyle would be good for him. Then he went traveling around Europe a few months. On his return to LA he decided he wanted to “hustle from the start to the top”, so he bought a table, chairs and a $3,000 suit with the intention of setting up a drop-in business advice service on the beach. He didn’t ever go through with it but the idea itself propelled him forward in the direction that lead to Mixergy.

Why didn’t Andrew set up the table on the beach?

In his mind it felt artificial – he was never going to be a beach hustler without a plan. He felt insecure about who he was in that environment, and was given some amusingly ironic advice from another hustler in the area who said he was better off setting up shop on the internet, “because that’s where everyone is these days”.

Where did Mixergy come from?

After throwing away the idea of table advice on the beach, Andrew started organizing business meetups, using the same principles of virility as his greeting-card business. Inspired by the fact that each of his cards would be sent to an average of 5 people, he made it a policy that each event would have 5 hosts, the thinking being that each host would bring at least 5 guests with them to boost the event.

Eventually, after shifting business models a bit, and combining the words Mixer and Energy, ‘Mixergy’ came about. It has evolved into one of the most extensive business interview sites around, with content from the biggest entrepreneurs on the planet. It is a huge online community with millions of followers who tune in to listen to Andrew interview eminent people from the world of business.

Andrew has finally started living the life that he was meant to live… building a legacy that will transcend time and leave everyone wondering where the great business and content of Mixergy came from!

‘Everyone should do something public facing’

“The people we admire make a meaningful contribution that outlives them”

When I graduated from college, I founded Bradford & Reed, a company that ran a collection of startups. Our biggest startups did online greeting cards. We were also known for launching Grab.com, an online game site that offered the chance at the world’s first billion dollar jackpot.

After I sold the last big chunk of that startup, I took a looooong vacation. I spent my days mostly cycling and traveling.

On Mixergy, I invite proven entrepreneurs to teach how they built their startups. The entrepreneurs who’ve helped me out by appearing on Mixergy include the founders of Wikipedia, Groupon, LivingSocial, LinkedIn, and over 600 others.

Want to learn from them? Start here: http://mixergy.com/get-the-top-mixergy-interviews/